We make up a weekly medium-term trade list based on CFTC reports and technical analysis.

The table below provides a description of the technical condition of the market on the most popular financial instruments, as well as information on the large speculators’ actions according to the last COT reports and the previous period.

If you want to use CFTC reports in your trading practice, you should understand that for an objective assessment of the situation it’s not enough to know the data of the last report. The dynamic is more important, in other words, comparing the statistics of large speculators’ actions in the current period with the previous one, so we publish both values in the table.

Note that the arrow direction gives us information about the large speculators’ actions (buying or selling) relative to the asset specified in the first column. For example, for CHF, the up arrow () indicates that COT net position indicator is rising, namely CHF is being bought, but not USDCHF.

Euro remains in an upward trend, another resistance level was broken on the Daily timeframe on Friday and a breakout signal was formed. New positions from current prices are of little interest, since risk-reward ratio leaves much to be desired. A pullback buying opportunity will appear after the end of the impulse wave and the formation of a full-fledged correction on the Daily timeframe. Trading with an adequate profit/loss ratio is possible only on smaller timeframes at the moment.

Bullish positions will remain relevant as long as the market remains above the support level of the Daily timeframe, the lows of August 15-18.

COT indicator slightly strengthened but didn’t reverse, so the general direction of COT net position indicator does not correspond to the technical condition of the market. This suggests that the probability of buying opportunities success decreases and the position size reduction in case of signals occurrence in the direction of the trend may be a good idea.

The British pound remains in the mid-term downtrend, a correction on the Daily timeframe is coming to an end. A pullback buying opportunity will appear in case of bearish candle closing below the resistance level, the highs of August 17-22. The nearest target is the support level with the range from 1.2770 to 1.2800.

The trend direction continues to be combined with the opinion of professionals, COT net position indicator decreases, large speculators are selling. Short positions will remain relevant until the price is below the resistance level of the Daily timeframe, the highs of August 17-22. The next target is the support level, the lows of December 5-8.

Gold and silver markets remain in triangles. Before the fact of the nearest support or resistance levels breakout, new medium-term positions look unattractive. Previously opened long positions will remain relevant until the market is above the support level of the Daily timeframe, the lows of August 15-16. Large speculators continue to buy, thus, the probability of breaking through these triangles up remains high. At the same time, it’s desirable to refrain from trading on the Daily timeframe until the market confidently breaks through converging formations. The New Zealand dollar remains in the medium-term downtrend, each new low on the Daily timeframe is lower than the previous one. The nearest mid-term selling opportunity will appear after the correction is completed. 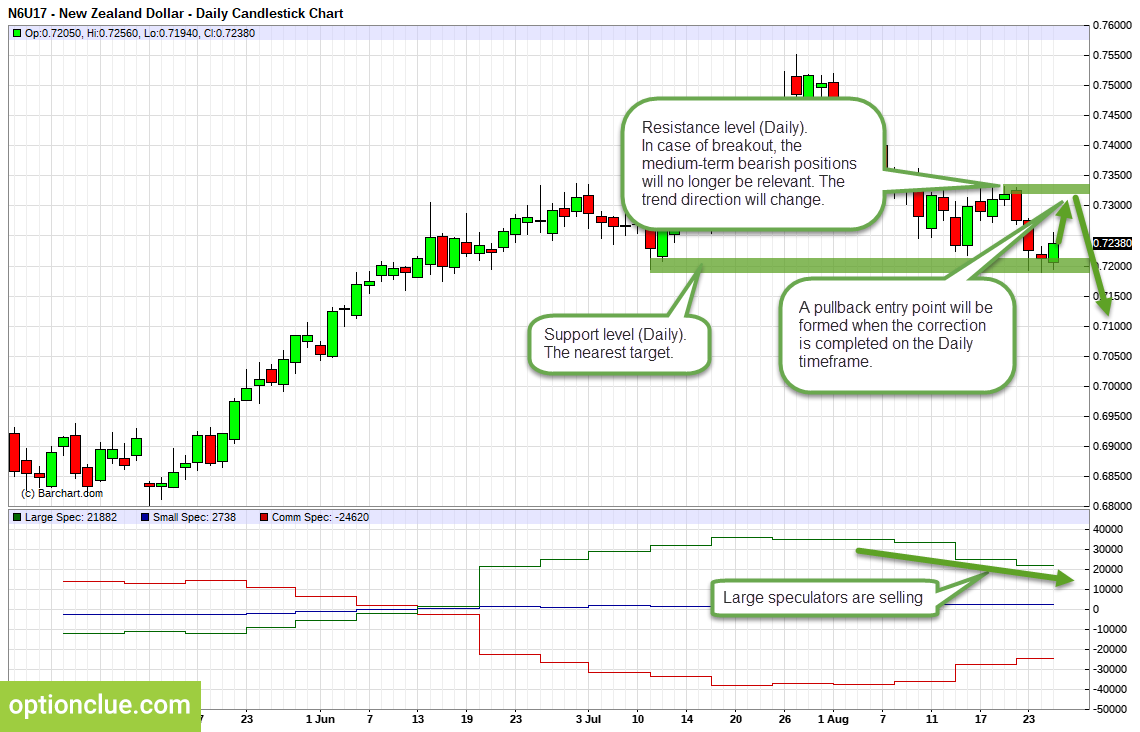 COT net position indicator decreases, large speculators sell, the trend direction on the Daily timeframe coincides with the professionals’ opinion. That increases the probability of medium-term bear signals success. The nearest target is Thursday’s minimums. In case of the correction continuation from current prices, a new support level of the Daily timeframe will be formed around these marks. If the market closes above the nearest resistance level, that is the highs of August 17-22, short positions will no longer be relevant.

Financial instruments with the correction close to completion on the Daily timeframe and with potentially the most promising risk-reward ratio are NZDUSD, GBPUSD, NZDJPY.

USDCHF, EURUSD are less interesting, but in the near future, they can also become noteworthy depending on the depth of the market correction.

After breaking through triangles the oil market, gold, silver, and AUDUSD may be interesting.

Other financial instruments in the trade list may be also interesting, but in these markets pullback trading signals on the Daily timeframe are likely to occur no earlier than a week.