How to use CFTC reports in trading. The logic of hedgers

Another article of the «How to use CFTC reports in trading» cycle is in front of you. Here we will talk about hedgers – market participants who purposefully sell in a rising market and buy in a falling market.

CFTC. Who are hedgers? (Commercial traders)

There is a myth according to which all transactions in financial markets are made by speculators, hence the main task of any trader is to take funds away from a less experienced colleague.

Introduction to the logic of hedgers (the Сommercial group in CFTC reports) can cause a paradigm shift for the supporters of this myth since from the speculator’s viewpoint these market participants act absolutely weird. They sell during the active market growth and when the market falls, they act on the contrary as active buyers. Fig. 1. Change in hedgers’ net position in a bullish trend

In other words, hedgers buy when speculators sell and sell when they buy. At the same time, hedgers are not crazy people as well as large speculators – these traders are professionals.

Hedgers are market participants who use financial markets to defend against possible unfavorable price movements. Hedgers include producers and consumers of goods traded in the market as well as all those who are interested in carrying out trade operations in order to defend against risks caused as a result of unfavorable market price changes. Hedgers often cover risks arising from operations in the real sector of the economy. Fig. 2. Hedgers are buying oil in a falling market. Net position is rising

Hedgers’ trading is not associated with speculative activity, that is an attempt to buy cheap and sell high. Naturally, the price of the trade is important, but hedgers’ goals differ from the speculators’ goals. Let’s take a small example to understand their logic better.

Sellers in the rising market

Suppose that farmer John has gathered (or is planning to harvest) 500 tons of corn. John as a producer of goods is interested in selling it as quickly as possible at the most favorable price.

It’s difficult to imagine the situation when a farmer is observing price movements for months in an attempt to sell goods at an ideal price. He needs capital to run his business. Therefore, farmer John can sell part of the crop in the market (this can be both stocks and future crops). In this case, most often it means the sale of futures, that is, contracts for the supply of corn in the future.

Suppose that John sells 300 tons of corn at a price of $100 per ton. Together with John thousands of his colleagues carry out similar activities, therefore net position of hedgers becomes lower than it was before (Figure 3). Fig. 3. The higher the price, the lower the net position of hedgers

If prices continue to rise after this and reach $130, then John may think about selling the rest of his crop, and the higher the market will be, the stronger this desire will turn out to be. The more expensive corn, the more profitable the sale of stocks (or the future harvest) and the higher the revenue. As a consequence, as the prices increase, net position of hedgers who also include corn producers will decline.

Buyers in the falling market

Why do hedgers buy during the decline in prices? It’s due to the fact that it is possible to include both consumers and producers of goods to this market participants group.

Let’s come back to the example with corn. Suppose there is a producer of popcorn whose name is Ivan. Corn is the raw material for Ivan and he is interested in buying it at minimal prices since it will help increase profit of his company. Fig. 4. Change in net position of hedgers in a rising and falling market

If the corn market starts to decline, Ivan will be interested in buying, and the lower the price, the more promising will be the additional purchase of corn to create stocks (or fixing low price of buying corn for the future). In this example Ivan acts as a hedger who will actively buy in a falling market.

The logic of hedgers

In the Forex market the logic of hedgers who buy in a falling market and sell during price increase will be identical to the examples described above. Naturally, in this case, hedgers will not be producers or consumers in the direct sense of the word, but their trading logic will not change. Hedgers can be participants who are interested in protecting themselves or their customers against risks associated with a rapid decline or price increase in a foreign exchange market.

The national currency strengthening is unprofitable for exporters and its decline is unprofitable for importers. At the same time, they can reduce or eliminate currency risks through the operations in financial markets and these actions will also classify them as hedgers. 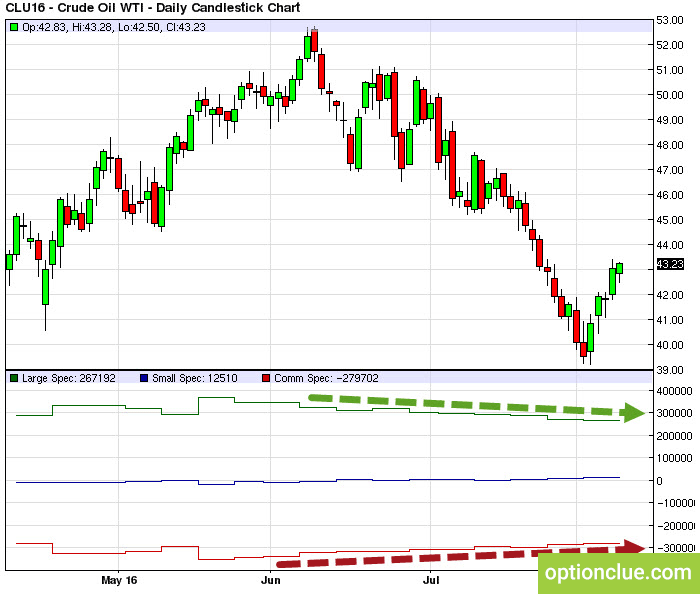 Fig. 5. Hedgers are buying oil in a declining market. Large speculators are selling.

The logic of these actions will be identical to the one we examined in the example with corn. Instead of corn, Euro (FX) futures or dollar index futures will be traded, and banks and companies specializing in risks insurance arising from price changes in these markets will act as hedgers.

Once again, I’d like to pay attention to the fact that hedgers’ conduct is contrary to the concept according to which speculators in the financial markets trade solely with each other. Not always a speculator trades with another speculator. Often the other side of the transaction may be, for example, farmer John or a company that deals with insurance of risks of changes in prices for food, currency or any other instruments being traded in the financial markets. In each financial market there will be two groups of participants with quite opposite interests – hedgers and speculators. An exception is the stock market where producers and consumers do not exist in the sense of the word used above. That is why movements of commodity or currency markets, prices of gold, corn, dollar fluctuations or energy prices significantly differ from fluctuations in prices of different stocks. This is directly related to trading volumes and existence of hedgers who have substantial resources and are always ready to sell if the market is rapidly rising or to buy if prices decline.

In the developed stock markets there are participants who buy during the market fall and sell during growth. Nevertheless, most operations in the stock markets are speculative. Largely due to this, different stocks can move very actively which is an important difference between stock markets and commodity and currency markets. This creates additional opportunities for trading strategies aimed to earn the maximum profit from strong unidirectional price movements.

Conclusions on the hedgers’ logic

Hedgers can include manufacturers and consumers of goods, insurance companies, banks, exporters, importers and other traders who use financial markets to defend against unfavorable changes in market prices.

Understanding the logic of hedgers allows you to look at the market situation from an alternative viewpoint. Each group of market participants possesses unique information that is unavailable to private traders and it can share it when selling or buying. The use of CFTC reports makes the private trader more competitive as it lets take the information and experience available only to professionals.